Before you read this post, make sure you have a watch of my first impressions and play around video for context: https://www.youtube.com/watch?v=iYGQPDCxPuk&t=925s

Now that I’ve had this palette for a week with ample time to play, mix and understand what’s going on, it’s time for a more in-depth review and swatches!

The lip palette comes in the classic black, matte, cardboard Anastasia packaging. The lip colours themselves are set in metal pans in a plastic palette. A plastic, removable overlay with shade numbers sits in the top lid so that you can see which shade is what number.

There is a large groove at the bottom for the brush to sit. (I’m still trying to work out why its so wide – it only needs to be half the size!) The brush is double ended with one side with a spatula and another, with a lip brush. The brush has a domed, flat shape and can make very thin lines which shows just how precise it can be! This, of course, is useful when applying lipstick to the outside of your lips!

The palette also comes with a metal mixing plate which is easily cleanable. 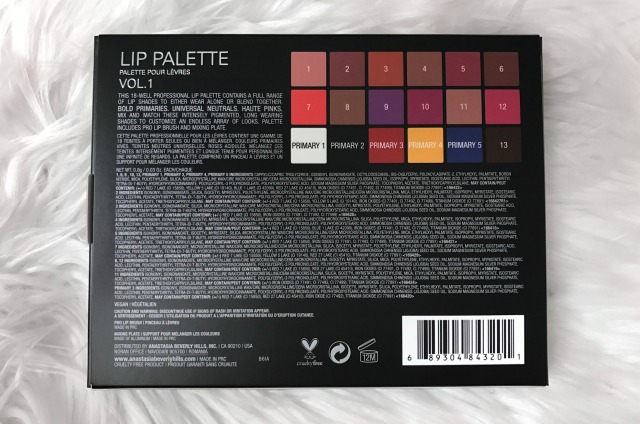 This is just the back of the packaging – it has the colours, ingredients, states that it is cruelty free and good for 12 months after opening.

At first glance, the lip palette looks like it has a massive shade range. However, I honestly feel like there were 3 shades of nudes that were very similar. With the mixing shades, I could have definitely made a few of the shades by just mixing some others.

The colours vary is texture and pigmentation. For example, the yellow and white weren’t as opaque as the other shades. Although, I do understand that it may be this way for blending and mixing purposes. But, this meant that I couldn’t wear either of these colours on their own. Also, I found that the “normal” colours were stiffer than the primary/mixing colours, which was odd considering you’d want the mixing colours to last the longest – so don’t make it so easier to scoop out!

Overall, the shades mix seamlessly together and the combinations are endless. You can mix bright colours, dark colours, light colours, pastels or just wear the colours on their own! There have been many lip palettes in the past (e.g Urban Decay Vice Lipstick Palette) and some that encourage mixing, but this is the first time it has been marketed to an every day makeup lover. They are all matte, but everso creamy!! 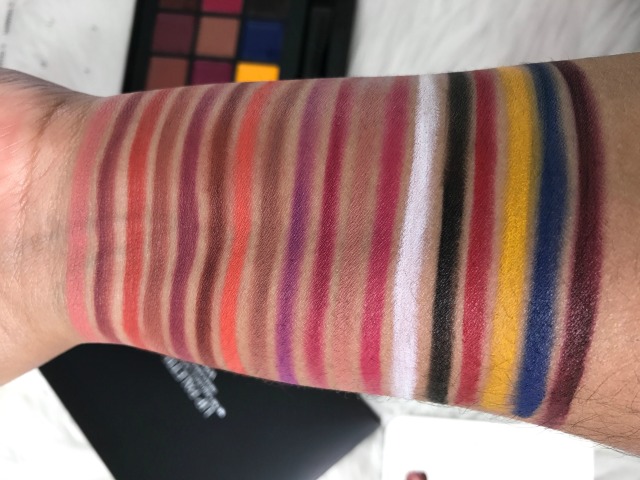 Here are a few random combinations I have been wearing this week!!
The last row is the mixed colour and the colours above are what I mixed together! 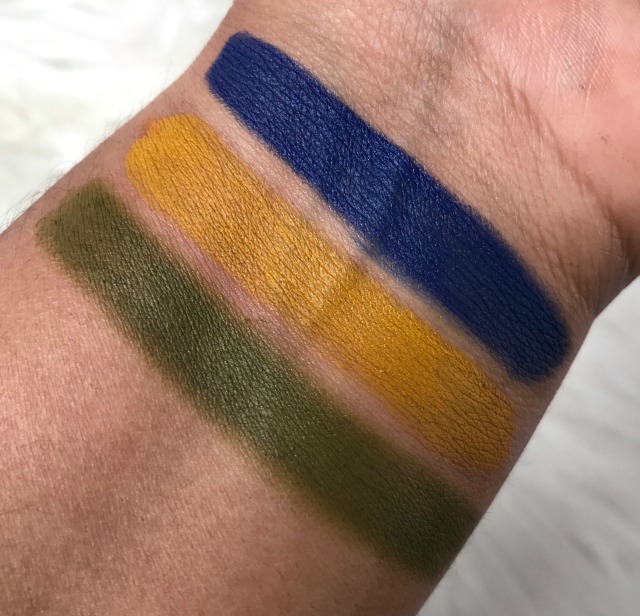 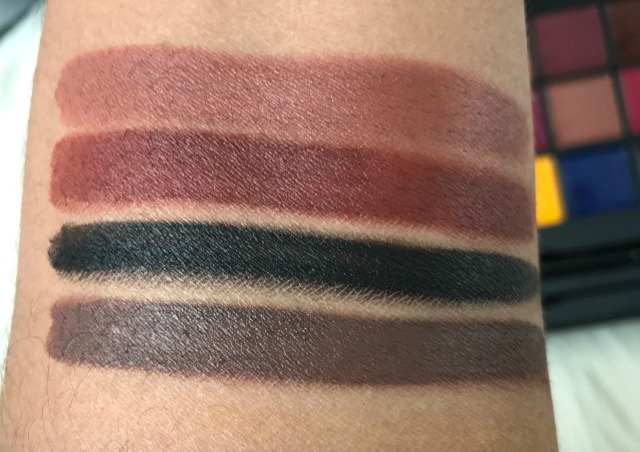 As mentioned in the video, this palette retails at USD$42 (with free shipping for US). I, in Australia, had to pay USD$17.95  which brought the total amount of the palette to about AUD$88 (depending on exchange rate fluctuations).

There are 18 shades, which makes each shade about $5.50. Each shade weighs 0.8 grams. In comparison, a MAC lipstick weighs 3g. A MAC shade in Australia costs AUD$36. So, 0.8g (less than a third) of a MAC lipstick costs AUD$9.60! And I have to say I MAYYY prefer the ABH formula. It lasts for so long and you don’t need that much. However, you have the ease of carrying around a MAC bullet!

Yes, it’s a palette. That means, it’s difficult to retouch in public (especially because it doesn’t have a mirror unlike the Urban Decay one!). AND if it’s a custom shade you’ve mixed with your own palette… you’ll have to carry the mixing palette around!?

Overall, I do really like this palette! I want to love it but just in a week I have hit pan on a nude shade (middle row, second from left – that grey thing you see? Yeah, that’s pan).

I have been wearing this to work every day and the brighter, darker colours last me 7-8 hours. But I usually touch up with a similar colour bullet lipstick (usually resulting in ombre lips). I do love wearing these shades when I go out with friends, go to dinner, activities that take less than 4 hours (maybe even more if no food is involved).

It has been so fun mixing shades and coming up with new and exciting things! If you’re looking for a palette to play with and wear for shorter periods of time (or take the palette with you) then this is for you!

Do you have this? What do you think of it? 😀