So, you’ve probably seen this mascara pop up on my instagram every second post because well, I LOVE IT!

I’ve had a little bit over 3 months of use of this mascara and I think it’s time to write a review.

How much is it and where can i buy it from?
I purchased mine form Mecca for $27. Whilst $27 is above my usual spend for mascaras which is usually $10 (when Maybelline goes on sale), I thought I may as well give this one a go seeing as though it promised to “adds volume and length to your lashes whilst nourishing and conditioning them”.

Why did I buy it?
I have the problem of picking off mascara and as a result, my lashes have become stubby and theres less of them. I wanted to try a nourishing mascara as mascara is an everyday must-wear for me.

What does it look like?
The packaging is a nice bluey-green colour. Its longer than my usual mascara tubes, but is thinner. The brush cylindrical with the bristles positioned in a kind of spiralling form. 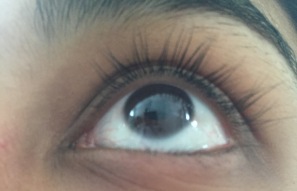 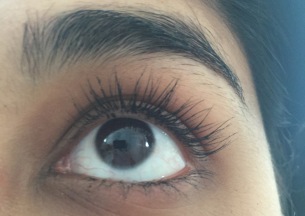 Two coats: (sorry for the brows)

The mascara has a tendency to smudge. But, this works in my favour along the lash long when i don’t want any liner as it adds a “voluminous” illusion.

This mascara added both volume and length. I do two coats to make my lashes stand out but any more than that and it may tend to get a bit spidery. This mascara, however, does not add a curl to it. If your lashes go straight out, it will make them look thicker and longer but on the same angle. I like to curl my lashes once at the roots and use this mascara to make my eyes look awake.

Whilst I have not noticed a substantial growth in my natural lashes, they have not deteriorated either.

This mascara is very easy to remove. It almost feels like it forms a sock that just covers each lash and easy comes off. (Okay that was the weirdest analogy ever but that’s what its like).

Was it worth it?
Yes, I will be repurchasing this soon!